Budgets Suck - But This Tool Makes It Suck A Little Less

Currently, I am reading a book called "Rich Bitch" by Nicole Lapin. The budget breakdown presented in this book has been the number one best tool that I have found. I can only speak on behalf of myself, but the general percents and the explanations about each one has led me to finally set a decent budget for myself.

I have tried to do all sorts of budgets - working backwards from what I typically spend, guessing at what my needs will be in the coming week/month/year, and all the other suggestions out there - but this one makes sense and works.

Once I set up a spreadsheet and input my income, I was able to do simple calculations to figure out how much money I had for each bucket. Then I adjusted to make it work for me. I am fortunate enough to walk to work now, so I did not need 15% for transportation. However, my rent is a little higher than 25%, so I moved the some of the money from transportation to housing.

I have been using this system for only a couple of months now, but it has really helped me understand my money. I have been able to set real goals and I know what my limits are. I feel empowered!

Since I love content marketing and designing graphics, I designed the one below for my own reference. By sharing it here, I hope you will be able to use it as well.

More about the book and the budget on Nicole's website: http://nicolelapin.com/richbitchbook/ 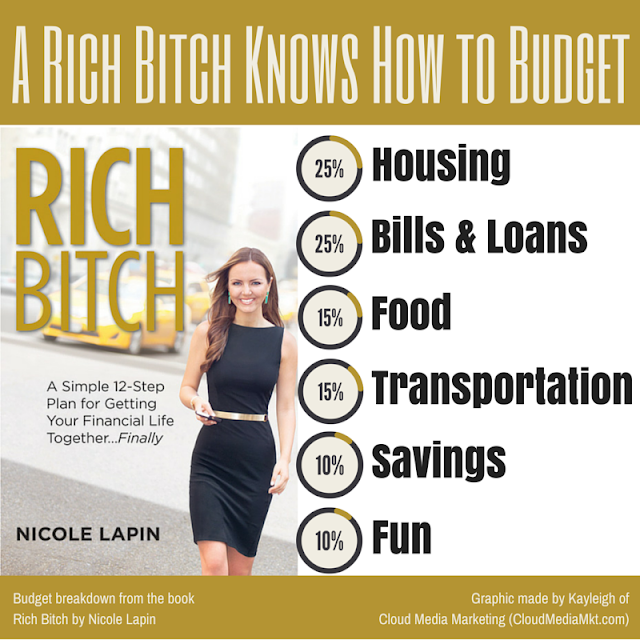 Posted by KayleighMihalko at 5:49 PM No comments:

Dear Future Self - A Letter Series About Lessons I Have Learned

Over the past few months I have started a new job and, well I'm not sure if this is because of the new job or not, but I have been noticing something specific about leadership.

There are those who are leaders and those who are doers. It becomes clear who is who once you learn to see the signs. Something small is all it takes. For example, I have recently heard people ask me if they were correct. They would say something that they felt, like a bottle cap is screwed on really tight, and then say, "Don't you think so?" They ask me to confirm their feelings or opinions. These are not young people either.

On the other hand, there are some people who speak with authority. They say things they mean and if it is an opinion, it is clear that they know that. They would say, "This bottle cap was screwed on very tightly."

Leaders are never concerned with others confirming their opinions. However, if they made a mistake, they are usually the first ones to admit it.

Some people could never be leaders. And that is perfectly fine. Imagine if everyone wanted to lead! Those who are not leaders, I call doers. Tell a doer to do something and it will get done. You might have to explain exactly how and when to do the thing, but it will be completed.

It will be interesting to see if this observation holds true over the years or if I end up expanding on it. Only time will tell on that one!

Email ThisBlogThis!Share to TwitterShare to FacebookShare to Pinterest
Labels: dear future self, lessons, something new every day, thoughts on leadership

I Want To Do This!

I just read the article 'Connecticut State Parks “The Sky’s the Limit” 2015 Hiking Challenge' on the CT state DEEP site. Now I want it to be warmer out so I can go hiking.


Maybe I am not the luckiest person in the world, but I might win some prizes along the way, according to the site! Stranger things have happened.

So, here is how this challenge works:

Step 1: Go hiking. There are 14 places around Connecticut that count:
Step 2: Take 2 photos of yourself at each location. One with the shield sign and one in the park.

Step 3: Email photos of at least 10 locations above to deep.stateparks@ct.gov or mail them (no thanks). Info must include your name and home address.