Catching Up Over Coffee - October, 2017 at J Rene in West Hartford


October, 2017 - Now that all of the wedding stuff has quieted down, my sister and I have tried to get back into meeting for coffee once a month. However, that is proving difficult. She has started working a more steady schedule at a restaurant, which means a lot of nights and weekends. With my office job, I work a Monday through Friday office schedule.

Four months since our last date, we finally found some time that worked for both of us. This was mostly because I was already planning a trip up to pick up an end table from a friend's mother who lived a town over from where we decided to meet. It was raining by the time I was down putting the table in my car and heading to the cafe, but I didn't really mind. On the other hand, my sister ended up sleeping in later than she expected and was about an hour late meeting me (not for the first time). 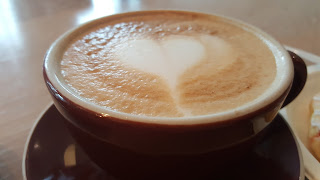 Finally! My sister and I found a coffee place that actually does designs with the foam! This is what I have been waiting for! Fortunately, the lattes were tasty because I was not impressed with the food. I was excited when I saw bundt cake, but it was dry and not very flavorful. My sister said her pastry was good at least. 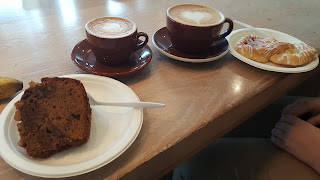 It was really cool to visit a place that added the designs to the foam. It was also fun to be in a coffee shop that served coffee four ways - drip, pour over, French press, and siphon - I believe. Walking into their cafe looks a little like walking into an old-timey laboratory. There are copper pipes everywhere and the staff wear aprons. The limited seating that there is lends itself to meeting new people, which is nice, but my sister and I were trying to spend some quality time together. The two top tables that they did have seemed to be the first to be filled. All of the people where were there seemed to be studying for some class or other, so we felt we should try to be a little quieter than normal as to not disturb them.

Overall, I could see myself popping back in there to grab a coffee while walking around the area if I ever find myself back in that part of the state. I'm looking forward to trying out the next location.

Catching Up Over Coffee - June, 2017 at Two Wrasslin' Cats in East Haddam

June, 2017 - With all of the wedding prep, my sister and I saw a lot of each other between January and May of 2017, so we took a bit of a break from our regularly scheduled coffee dates. Before I go over seas on my honeymoon, I wanted to make sure to get one more coffee trip in with my sister.

This time, we decided to visit a place that I just knew we would both love as soon as I heard the name, Two Wrasslin' Cats in East Haddam. 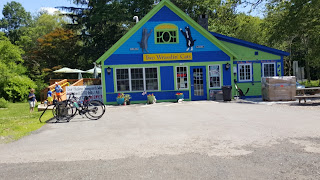 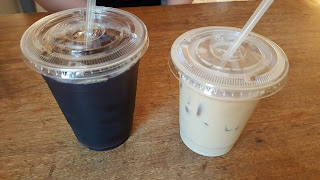 I read about their story online, sent my sister a link, and then we immediately made plans on when to meet. It took each of us about an hour to get to from our respective homes, and boy was it worth the trip! Not only was the coffee delicious, the food was too, including the ice cream!

My sister and I ate our food inside at one of the many tables and chairs. The cafe is built inside an old house, and so it feels as if you are eating at a friend's home. Up the small ramp to the left of the counter, we found three or four small rooms that were filled with an eclectic mix of furniture. Every wall and the ceiling was covered with decor, mostly of the feline sort. 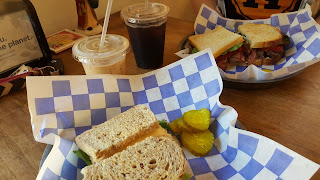 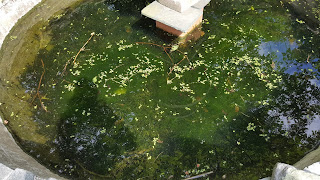 After we finished our food, we went back up front to order ice cream, which we then took with us outside to the back yard where we found a fountain, a small patch of grass, and some trees. We had the yard to ourselves the whole time we were there. It was a nice day, but not a great day, so I could see why it wasn't as busy as it should have been.

On our way out to the parking lot, we saw that even the concrete sidewalk had been cat-ified: 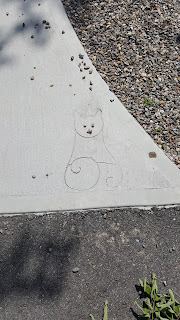 I believe my sister has already been back to this cafe with some friends of hers. I know I'll be back the next time I go to a show at Goodspeed Opera House, which is less than a mile down the street from Two Wrasslin' Cats