December, 2016 - So much for meeting up once a month for coffee! For four months in a row we were good, but then life got in the way. My sister and I saw each other now and then with the rest of the family, but we didn't go out for coffee just the two of us, so it doesn't count for this blog.

We finally got a chance to catch up over coffee in December. My sister has recently taken up sewing after watching 10+ seasons of Project Runway. She bought herself a nice Brother sewing machine and has found that she has some skill. I asked her if should would be able to make my wedding veil and she said yes. We decided to meet up at Jo-Ann Fabric in Southington so that we could also go out for coffee in a different town as well.

Before I headed up to Southington, I did a quick search online and found a coffee shop that was close to Jo-Ann Fabric called Caffe del Mondo.

The Caffe was rather small and quiet with a few rustic style wood tables and chairs. A long bench was built into the side wall opposite the door. To the left of the door was a charming fireplace with big comfy chairs.

For food, my sister could not resist the gingerbread cookie and I had the cinnamon twist. For coffee, she had an iced coffee and I had a Milky Way latte. This turned out not to be our favorite place. My food was dry and the coffee was alright but not great. The service was average. 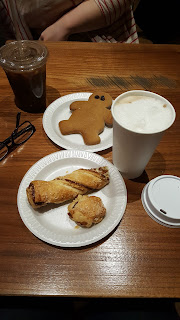 Would we go back? Maybe for a quick coffee fix if we happen to be back in the area, but I'm not planning a special trip.

Posted by KayleighMihalko at 12:38 PM