Catching Up Over Coffee - January, 2017 at NIX in South Windsor

January, 2017 - Thirteen months after saying yes, and less than four months before the big day, it was past time for me to pick out bridesmaids dresses. I had gone once before with my best friend and narrowed my choices down to two, but I couldn't decide. I wanted to see how one of my other bridesmaids would look in the dress. So, I made an appointment at David's Bridal in Manchester with my sister. 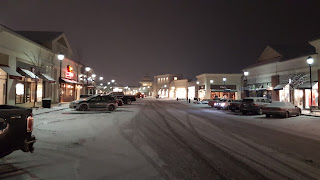 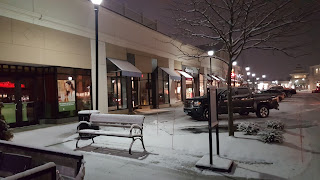 Unfortunately, it snowed all day the day of the appointment. Manchester is over an hour away from me, but I figured if I drove slowly and carefully, I would be fine. I was right. There were hardly any cars on the highway compared to normal rush hour traffic. My sister got to the appointment on time and started to try on the first dress. I made it there soon after.

We video chatted with our other sister and decided to go with the second dress. I love how it works with my dress!

After the appointment, we were planning on going to a cute little coffee shop in South Windsor, but they ended up being closed due to the snow. We did try calling and no one picked up but there was no message saying they were closed. We decided to drive over to the plaza to check.

Fortunately, there were lots of little shops in the shopping plaza, including a few tea shops. Even the Ben & Jerry's served coffee and tea. By this time, we were hungry, so we decided to try NIX. We thought they had coffee and tea, but they only had regular Lipton tea. The food, however, was great!

I had the ahi tuna salad with a lemon vinaigrette and my sister had risotto and a side of mac and cheese, which she claimed was the best mac & cheese she has ever had. It did look good, but it was the last day of my Whole30 challenge, and I didn't give in! 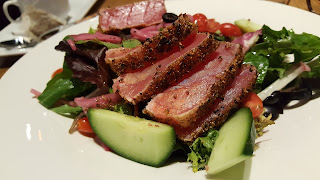 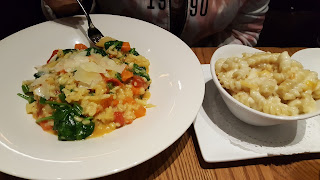 Even though we didn't have coffee, we still had a great conversation and a great meal. It counts.